ZANDRA RHODES. A HYMN TO LIFE. 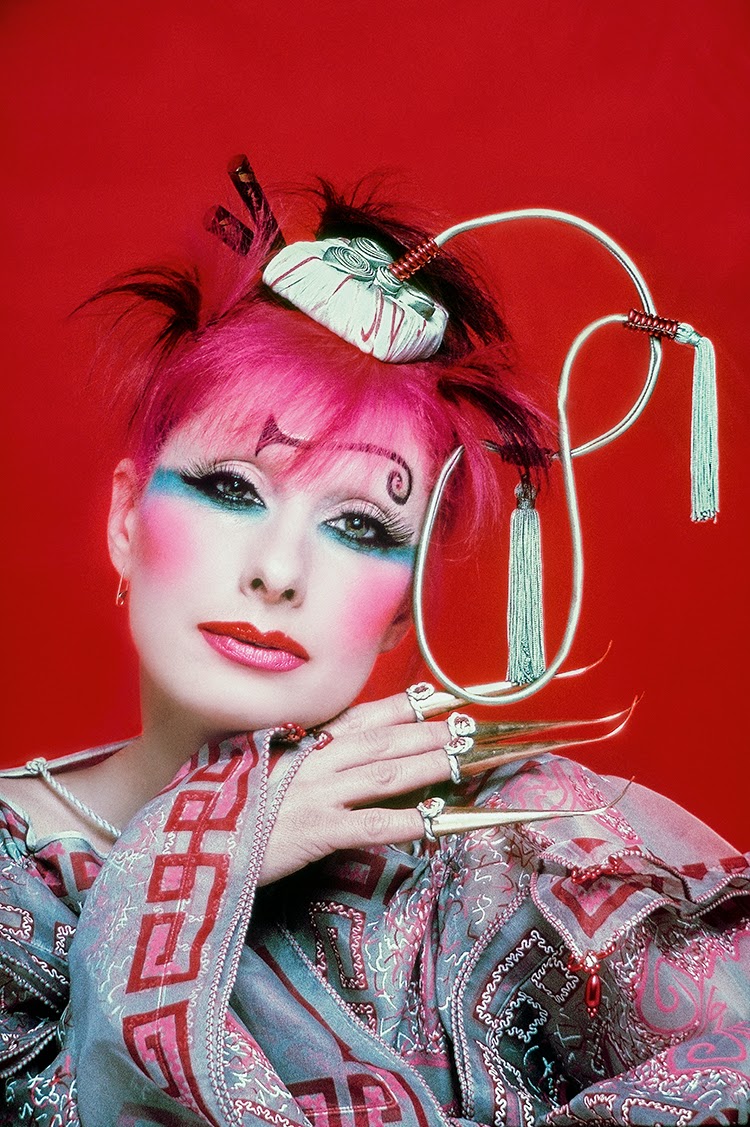 Beyond the color. Beyond the conformism of the British fashion industry. The main characteristic of Zandra Rodhes' art is definitely the combination of these two elements. Thanks to her creativity, she already in the mid-sixties gained a privileged position within the new generation of original designers. Her attention is always focused on the garments and her approach to fabrics always has a great dialectical impact. The bright colors and the vivid patterns are like a surreal déjà-vu, with ethnic inspirations and a great theatrical impression. The hand-painted clothes made of chiffon, with flowing sleeves and wide necklines, refer to the Eastern tradition while overflowing with incredible sensuality. The safety pins displayed in her dresses take inspiration from the punk culture and earned her the nick name Princess of Punk. On the other hand, the golden swirls on the straps from “The Renaissance Gold Collection” (1981) refer to the Italian sixteenth-century taste, that were also so well beloved by Bill Gibb. Zandra Rodhes has designed for clients as diverse as Princess Diana, Jackie Onassis, Elizabeth Taylor and Freddie Mercury. She keeps designing for the rich and famous around the world, from royalties to rockstars, always with a spontaneous and natural approach to garments and colors. After so many years, she still works up to 14 hours a day. An incredible source of vitality and glee, from inside the materials. A hymn to life.
Pubblicato da Ombraluna Vintage a 00:28 Nessun commento: 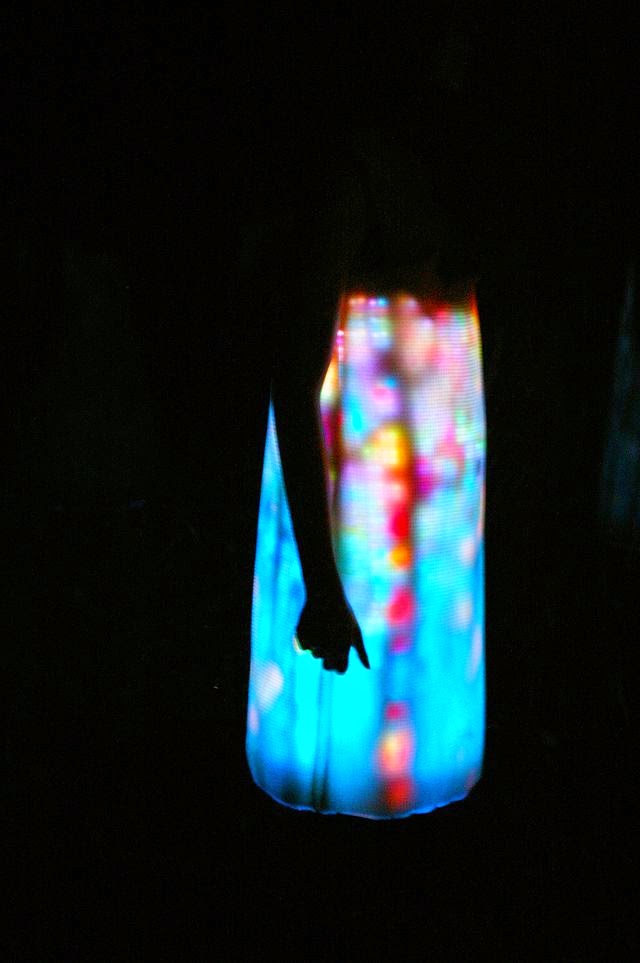 More than fashion. According to Hussein Chalayan the boundary between fashion and art is vague and in constant motion. His collections and fashion shows are always in the middle between show and installation and no one has ever questioned the role of the designer and the fashion like him . Eternally dialectic and with a continuous antithetical clash, his poetry can subvert the usual rules of consumption, while bending the production flow of appreciation. To Chalayan fashion is a syncretism of different disciplines, from anthropology to science, and his collections are always inspired by new technologies and by his personal approach to them. When he presented his first collection, The Tangent Flows, in 1993, his position on the world of fashion became immediately clear. The project was to bury silk dresses and dig them up a few months later. The outcome was really unpleasant, but the provocation had as a result that Brown, the luxury boutique in London, bought the entire collection. In 2009, with the collection Inertia, Chalayan applied the concepts of speed and new technologies to the garments. In the 2011 collection, Airborne, he used the LED technology to create stunning light shows on the catwalk.
Thanks to Chalayan, a new flow continues to increase, a new futuristic emanation spreads, a new window on fashion is now open to the world and to the feelings of modern man.
Pubblicato da Ombraluna Vintage a 04:35 Nessun commento: 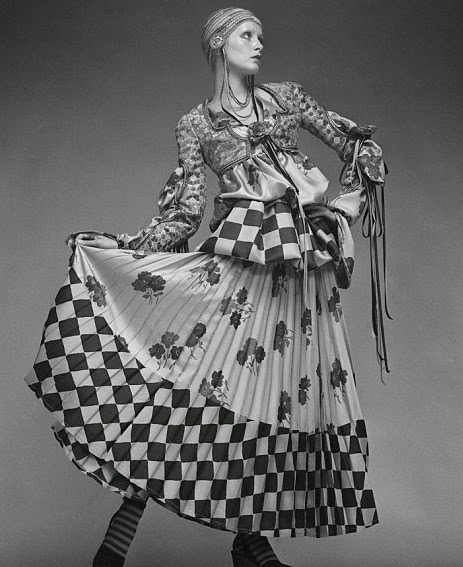 An obsession and a rare gift. The artistic contribution to fashion of the eclectic designer Bill Gibb could be summed up in these two words. He came from New Pitsligo, a small village in the north of Scotland, and he moved to London at the age of 19, exactly in 1963. His career was fulminating. It took him just a few years to have his own fashion house and make clothes for celebrities such as Liz Taylor and Twiggy. By 1975 he was in retail. His entire poetry revolved around an incredible inclination to the romantic style and the traditional garments of the close Eastern Europe. Drapery with classical references and wide sleeves with references to the Italian Renaissance are just some of the main elements of his artistic production. The innovative use of many different patterns - from floral designs and geometric patterns through to checked tartans - within a single dress helped creating “the Gibb style” and consecrate him as master of decoration. Incapable of understanding the logic of business, he always refused to make serial productions of his clothes. Designing clothes and seeing them worn on elegant women gave him the greatest pleasure. A dreamer, a free spirit, a poet of the fabric. He died very young, leaving a huge gap in the fashion industry. 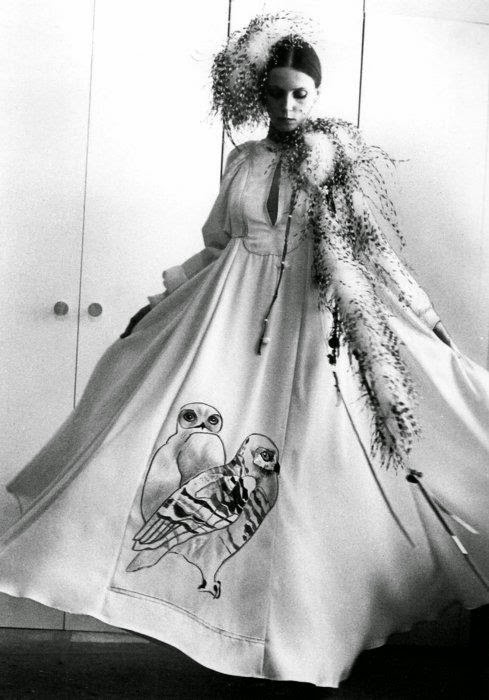 THERE IS NO LIMIT TO IMAGINATION 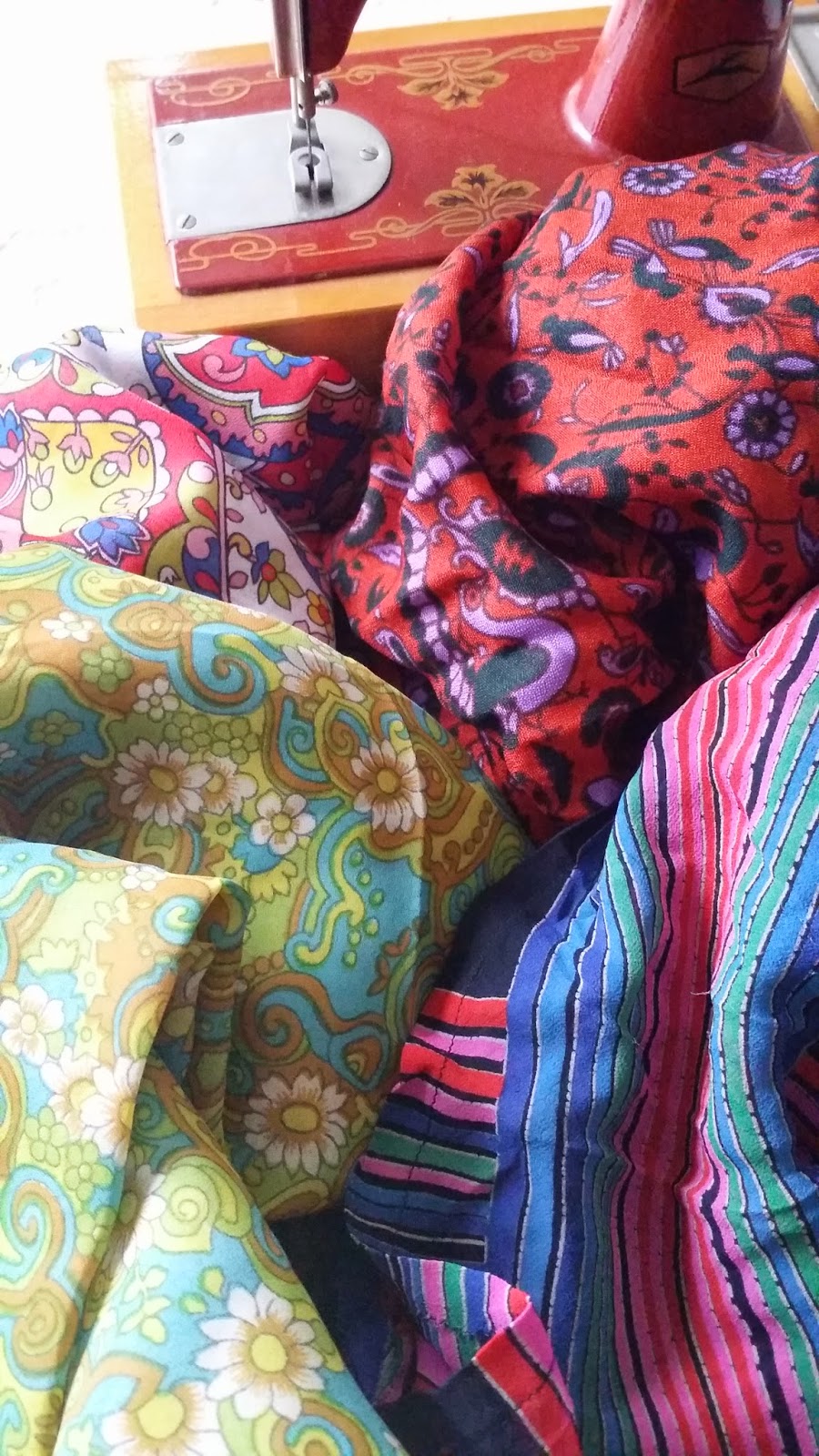 The making of textiles is a form of art. There is almost no limit to the variety of effects which may be produced by combining different kinds of thread and structure. The design of the textiles is obviously influenced by the nature of the fibres and by the weaving  processes. It may vary from the simple twist of weave and warp of an elegant piece of  taffetà, to the intricate and  elaborate threads of brocade.
The fusion of different patterns and the addition of colour can improve creativity. During the years famous designers from all around the world have proved that. Fashion has gone through an endless series of tests. It has experienced the medieval romanticism of shapes, fabrics and colors of Bill Gibb. It has suffered the deconstruction of the buried clothes of Hussein Chalayan. It has witnessed the incredible and colorful sensitivity of Zandra Rodhes. It has been seduced by the plastic revenge and the sexual empowerment of Paco Rabanne. There is no limit to imagination.

I simply adore these four designers and I would like to introduce you all to them. So I’ve decided to write a post about each of them that will be online in the following weeks. I hope you will enjoy!
Pubblicato da Ombraluna Vintage a 03:11 Nessun commento: 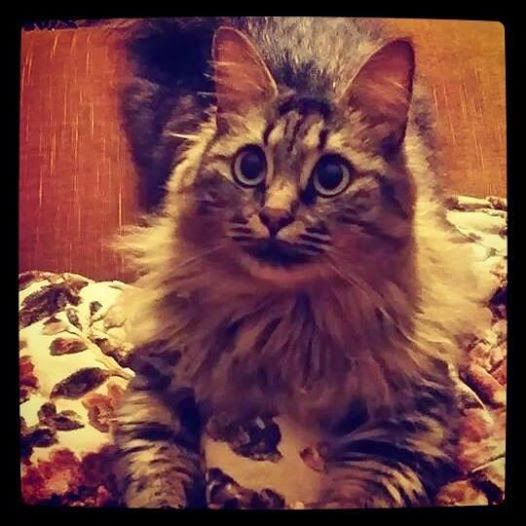 Small footprints made of dust. Staring eyes . Long spider licorice legs. Continuous vibrations and subtle whispers. Cats always inspire immense poetry.
They are beings from other worlds and they simply exist to teach us the value of silence and respect. The incredible importance of small things. The discovery of the sun as a force capable of bringing you back to life. The revelation of small secrets made of wind and a scent of rain.
I was born in a family of cat lovers. My grandfather was one. My father is one. My mother has become one. I was only two days old when the family cat slid into my bassinet. No scratches, just a gentle warmth. She kept me warm until my parents found her, and yet they didn’t have heart to push her away. I owe my imprinting, the most sensitive part, to her. She was called Pallina and she was the mother and grandmother of generations of cats in the family garden. After her, I loved, collected and attended to hundreds of cats. I have wonderful memories of all of them. Funny, genuine laughter that only clumsy movements and poorly organized ambushes can give you. I grew up with the cat smell. To me that smell takes me back home, to the warmth of my first blankets, to the games in the shade of the pear tree. In any part of the world I am.
Pubblicato da Ombraluna Vintage a 12:41 Nessun commento:

IT'S SUCH A NEW LOOK! 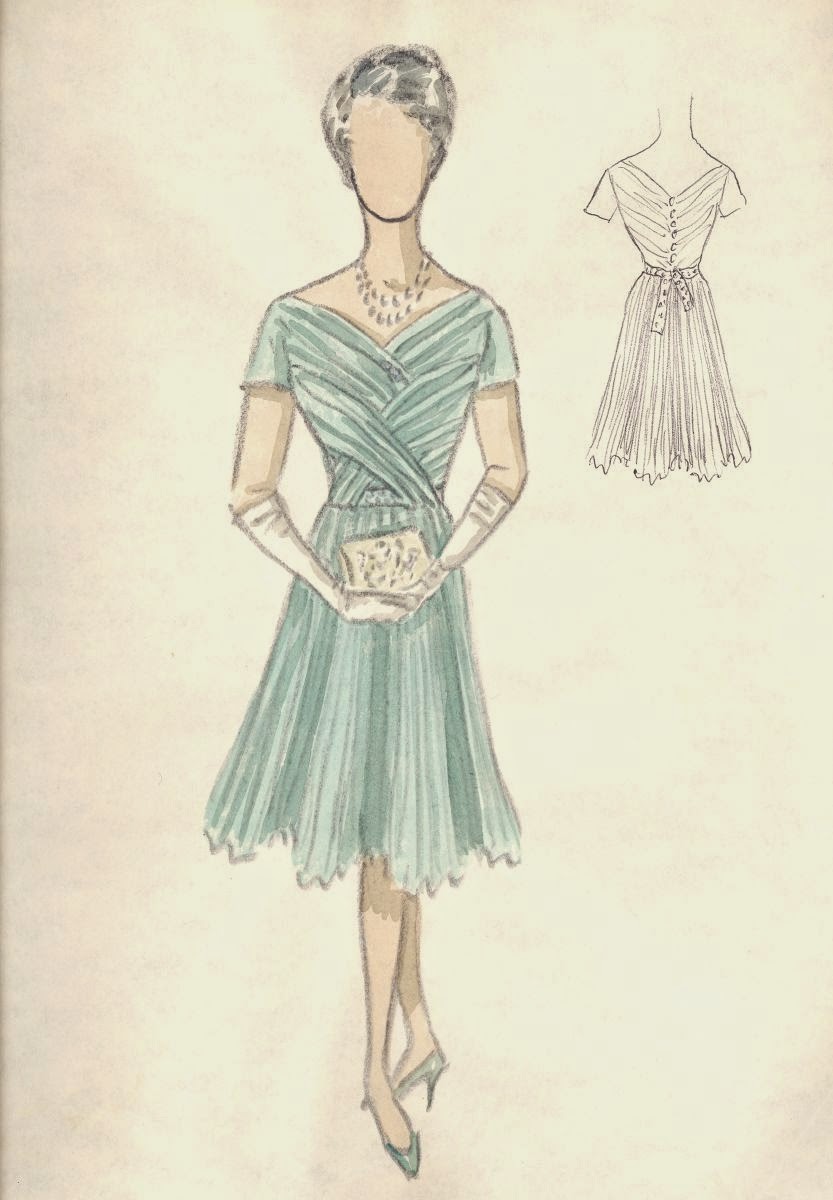 Debris and renewal. The fashion in the post war period started again from a simple act of catharsis. The austerity that characterized the years of the war had to be forgotten. The burst of optimism, the new aesthetic dimension took the start in that very discouraged and, years earlier, occupied France. An authentic style and a soft elegance would take the place of the boxy military uniforms. Light skirts, wasp waists and a delicate prosperity would for the next 10 years be the rules that fashion would respect. The author of this revolution was a French designer, Christian Dior.  Exactly the 12th of February 1947 at 10.30 am in the halls of the Maison on avenue Montaigne number 30, he presented his new idea of the woman with a spring-summer collection of 90 models. Carmel Snow, editor-in-chief of Harper's Bazaar, would later name this the New Look. The Maison was flooded with orders from famous international customers from Rita Hayworth to Evita Peron. Dior also began to sell the exclusive rights for the individual models, thus creating a precedent which became later very common, and ensuring that the New Look could be produced all over the world as a international trademark. A new style was born and with it a different concept of fashion came to life. 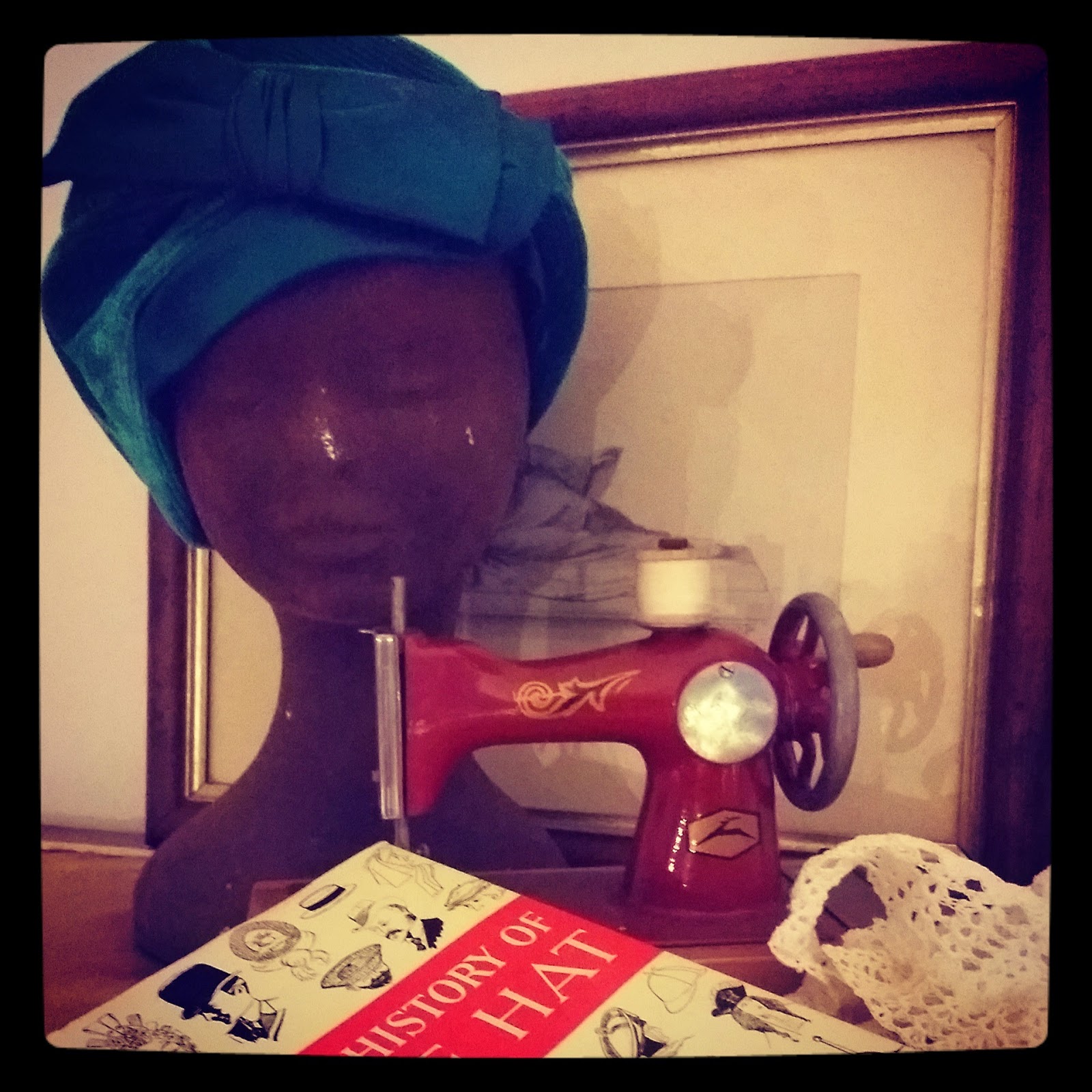 A head and a thousand thoughts. A head and a thousand hats. Because when you collect them, when you are really passionate about them, it is hard to decide which one to use and on what occasion. My grandmother used to have a lot of hats and she told me she lost them all during the war. Too little time to evacuate and too much pain to think about vanity. She often told me how much she cared about them and she often spoke of the one she wore on her wedding day. It was small, made of felt and with a light gray veil. Her cousins, ​who lived in Florence, had given it to her for the occasion and she always told me that she felt like a diva wearing that hat. Unfortunately she didn’t wear it ever again. She didn’t have the chance, and when the war broke out, the only thing she could save was herself and her child.
I've always found hats very mysterious and I've always loved to wear them without thinking much about how, when and why. I've never had a favorite hat, I always love every single one unconditionally. I always carry them with love. I always display them with great pride.
In front of the old mirror of my grandmother, looking at my little reflection, I feel like a diva too.
Pubblicato da Ombraluna Vintage a 11:50 Nessun commento: